Today is a weird day. It’s my 22nd wedding anniversary, the first one since our separation almost a year ago (in eight days to be precise), and I don’t exactly know how to feel about it. I woke up still wanting to wish him a happy anniversary this morning. Is that weird? Is it odd that I’ve spent the entire day missing him? Okay, so it’s not exactly him that I miss. It’s the promise of what was “supposed” to be. What’s funny about that is I thought I’d mourned and come to terms with it already. I guess I still haven’t completely let go of the illusion, though. 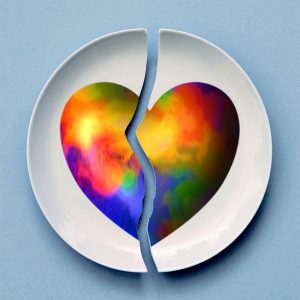 It’s been quite a while since I posted in my story, so I figured this would be a good day to give a little update. So here goes… My ex and I have finally been officially living apart for about the last three months. Although things have still been incredibly stressful in our personal lives, our relationship has improved quite a bit, especially in the last month or so. Come to think of it, that’s probably part of what’s making today more difficult. We are starting to feel a lot more like friends, and he’s basically been the only “friend” I’ve had regular contact with my entire adult life. Yeah, let that sink in.

I was just barely 18 years old when we got married, and he was not quite 20 yet, so right there the odds were not in our favor. That combined with our mutual need to escape our similarly toxic, abusive families, and our lack of understanding about the effects our childhoods had on us, made for a tumultuous life together as we desperately searched for what was missing from our lives in each other without first understanding what was “missing” in ourselves. And because neither of us had any examples of a healthy relationship to draw from, we were sort of doomed to relive what we knew, which was extremely dysfunctional and unhealthy to say the least.

About 15 or 16 years into our marriage, I started to open my eyes and really see what was going on. He wanted to stay asleep, though, and he really resented me for waking up. Furthermore, he was angry with me for trying to wake him up too. He just wasn’t ready yet, but I wasn’t ready to give up on him either, so I spent the next few years trying to drag him kicking and screaming down the “road to recovery” with me. It took me that long to realize that what he had been doing to me our whole marriage was abusive because it didn’t look exactly like my dad’s abuse did. The other difference is that my ex can admit his behavior is sometimes abusive. Not in the moment, of course. In the moment, I’m just a pain in the ass who deserves what I get for fucking with him…but that’s not what this is about. This is about us both eventually realizing we have serious problems that need major work before involving another person in our lives. This is about us finding our way to friendship with one another.

The truth is, I don’t know if he’s really changing anything or not because we don’t live together anymore, and it’s a lot easier to hide things from me now, but I’ve never really believed he has NPD. He did, however, grow up in a narcissistic family dynamic, like I did, and we both learned some severely unhealthy behaviors as a result. I believe he is exceptionally hurt, out of touch with his emotions, and unsure of how to process them at this point, but I know he wants to be happy. He just doesn’t know how to go about it yet. And there’s no denying he loves our children and wants what’s best for them. That’s not something a narcissistic parent feels for their kids. I genuinely believe he wants to get better. We both cut off contact with our toxic, abusive family members a long time ago, and we’re in counseling individually now, so my hope for “our” future is that our friendship keeps growing stronger, and our kids continue getting to have birthdays and holidays with both their parents for as long as they want them.

Now that I find myself at the end of this, I think I actually do know how I feel. I have mixed emotions. Twenty-two years ago today, I thought I married my best friend, and I really thought it was forever. I think it’s completely reasonable for me to feel sad and disappointed that I didn’t get to have the “happily ever after” I had planned. But then again, who really does? We all make plans that don’t come together for one reason or another, and that’s okay. That’s life. It’s also okay to mourn that loss. I feel excited for my future in a way that I’ve never experienced before, as well. I’m really looking forward to seeing where my life goes now that I understand that I’m the only one putting limits on myself. I’ve made it my mission to get the hell out of my own way. After all, I am my only real obstacle as it turns out.

Today I woke up on my 22nd wedding anniversary and realized I still love the man I’m divorcing, and that’s perfectly acceptable. He will always be my first love, and he will always be the father of my three amazing children. I will be eternally grateful to him for everything we’ve gone through together, because all of those experiences and lessons have made me who I am, and they’ve given me the strength to continue becoming myself.